And I missed it. But not because of a puncture or a fall off my bicycle. Actually, my stylist misheard my need to finish by 12:15 to make the 1pm show. At 12:30pm, they hurried to finish my hair. (Not just to have it pretty for the show but to cover the grey!) 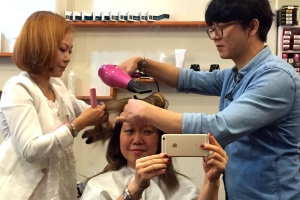 I briefly felt (and looked) like a model in preparation mode. I cycled home quickly and my husband Justin offered to iron my trousers for me. I hurriedly dressed and finished applying my makeup. As a result, I made it to the Weekend Edition show by 1:30pm and saw the last few minutes of the Michael Lo Sordo collection. A security guard suggested that it might be possible to exchange my ticket for the 3pm show. I had splurged and bought a front row ticket. Fortunately, as it was Sunday, the last day of Fashion Week, there was space.  I breathed a sigh of relief. The ladies at the ticket counter explained that there were a number of events and workshops to enjoy before the next show. Also, I had access to the Star Lounge for free drinks and canapés.

I wandered and came upon the Redken booth. A young man with blue and pink in his careful coif suggested I try the temporary colour on offer.  Two young ladies wielding hairdryer and brushes were applying temporary colour with a brush-like applicator. I was hesitant to offer myself up for what could be a colour and/or style mistake but was curious. The stylist suggested a little “rose” for my hair, not to be confused with pink. I sat.

I found it to be a complete waste of time. Not only was my lovely style forever altered but the colour made my hair weirdly hard and un-moveable. Never mind. I was promised that it would wash out in two or three washes. A souvenir of my curiosity.

After my mad dash on bicycle from stylist in the city, to home in Surry Hills, to Carriageworks in Eveleigh, I was thirsty. I went to the Star Lounge for a giant bottle of water.

The crowd was calm. The bar staff outnumbered patrons two-to-one.  It was a lovely atmosphere for me, a first-timer to the world of Fashion Week.  I understood, chatting with a stylist at the bar, that things had not been so calm earlier in the week. Fortunately, water was readily available and thirst quenched, I went in search of additional amusement before the 3pm show.

It presented itself as a hair master class. The beautiful dark-haired model dressed in black, sat very relaxed with legs crossed in front of us. The globe-trotting stylist was creating waves with a hot wand and giving us instructions on how to do this at home.  He encouraged the crowd of 100% ladies to ask questions as he worked. He wanted audience participation but no one dared. I asked a question to fill the silence. “What you’re doing looks so easy and natural to create. Is it just practice that makes it possible to recreate what you’re doing? Every time, I try something like this at home, it just doesn’t work.” What ensued was a discussion about using a wand such as the one he was using to create waves.

I thanked him.  I have been straightening my naturally wavy hair for the past two years for a change. He did offer a suggestion on creating a “fake bob” which I used last week to keep my hair dry under my rain hat.  See “Rain Days in Sydney” https://veloaporter.com/2015/04/23/rain-days-in-sydney/.  It involved plaiting one’s hair loosely and then tucking it under itself. The plait keeps the hair in place.  I didn’t need to plait my hair but tucking it in was very effective.

The master class over, I wandered to the auditorium for the show as seating had begun. I thanked the security guard for her suggestion to exchange my ticket for the next show. I sat next to some fabulous young ladies who were casually dressed and enjoying the last day of Fashion Week.

We chatted and I told them about veloaporter.com They were surprised that I had cycled to the show wearing my long white trousers. Of course, they loved my helmet! We started to follow one another on Instagram. The lights dimmed and the show started. The clothes were beautiful but I was shocked by the extreme thinness of the models.

I was alarmed to see group of young girls seated on the front row opposite me. I realised that I would never take my young daughter to see a Fashion Week show. Providing an impressionable young girl with positive role models is a constant challenge for me and Justin.  The models’ standard of beauty was unrealistic and un-achieveable for most women. I understood that the role of these women was to provide a backdrop for the clothing.  After a few minutes, I realised that I had adapted to the ladies’ body structure and could concentrate on the clothes.  There were some beautiful pieces that were very bicycle-wearable.  And lovely shoes.  I’ll post more on Pinterest soon. Here are some of my favourites:

The show over I said goodbye to the ladies and went to the ladies toilets. I was accosted by a woman at the sinks. She had been upside-down fluffing her hair to the requisite volume. I complimented her on her sparkly-gold-custom cowboy boots while I was washing my hands. She gave me the full-explanation of their provenance and I saw that her foundation was also gold tinged. She complimented me on my trousers. She asked me what I did. I told her about this blog. “Wow! Cool!” she said. “Are you interested in cosmetics?” she asked me. She explained that she had a cosmetics company and was interested in collaborating with bloggers. “How many Instagram followers do you have?” she asked. I told her that I had just started at the end of January and had sixty-four. “Sixty-four thousand?” she asked.  “No. Sixty-four.” I repeated. I politely exited the conversation and the ladies’.  She had “other fish to fry,” I could tell.

Outside, the start of the three-days-of-rain that would hit Sydney was building.  The temperature had dropped and the wind picked up.

Fortunately, I had my rain jacket, trouser cuff and rubber band in my handbag..  It was time to go home. By bicycle of course!