I was shopping at Officeworks one evening. Amidst the notebooks and pens, I had no idea of the drama outside on Pitt Street. I emerged triumphant from my search for a specific type of notebook and then had the shock of my life. I had locked my bicycle strategically to a post, in front of the Hilton, away from passing cars. But as I approached my eZee Sprint I could see that there was something wrong with the back wheel of the bicycle.

It was now curved. A sense of unreality washed over me as I said to myself, “Why is my wheel curved?” And then, suddenly, I felt hot. Someone had hit my bicycle with their car. I bent over to unlock my bicycle from the post in front of the Hilton. The curve in the wheel was so severe that it was impossible to walk it home. Then I noticed the piece of paper stuck under the back rack. Written in a shaky hand was a name and a telephone number.
A young woman approached as I stood, nearly in tears. She said, “Is this your bicycle?” “Yes.” I said. She told me that she had seen what had happened. A woman in a white car had emerged from the hotel garage. She had hit my back wheel while she was turning onto Pitt Street. Amazingly, a few other bicyclists were present and prevented her from leaving. She wasn’t aware of the damage she had caused. A crowd formed. The bicyclists insisted that she leave her name and contact details to pay for the damage to my bicycle. They detained her until she did so. The young woman was pleased that she had met me to relay the incident. We agreed that the timing was incredible. I called my husband Justin and told him what had happened. I would have to leave my poor bicycle locked to the post overnight. I may have even whispered a few soothing words to it. I was in shock. So much so that I walked home instead of taking a taxi.

After dinner and a glass of wine with Justin, I called the woman who had damaged my bicycle. We had a civil conversation. She was older by twenty years. She said that she had tried to make a tight turn onto Pitt Street and had inadvertently hit my bicycle with the front of her car. She had damaged her car as well. Apparently, one of the cyclists who detained her was a courier and he had become quite adamant that she leave her details. She gave me her insurance claim number which would pay for the repairs and the transport to Omafiets Dutch Bicycles. We agreed that there would be no need for us to speak again.

The day after arranging a courier company to pick up my eZee Sprint from Pitt Street, I went to Omafiets. Chris recommended that I try a Gazelle Orange C-7 e-bike.

After a week, I was in love with yet another Gazelle. The ride was incredibly smooth and I felt super tall. I’ve started raising my seat on all my bicycles for additional leverage on each pedal stroke. It means that when I want to stop, I brake and then simultaneously step down. I do the same on my road and mountain bikes.

The only thing that required a little adjustment was using the twist gear shift on the right handlebar. At first, I pedalled while shifting gears and noticed a delay. I worked out that I needed to stop pedaling, coast for a moment and then shift gears. The hydraulic rim brakes gave me a wonderful sense of security. Rack, kickstand, fenders and lights are all included. The Bosch motor was incredibly responsive and with four settings Turbo, Sport, Tour, Eco, I could moderate how much assistance I needed during my commute with the touch of a button.  I discovered the bell which was built into the left handlebar and needed a simple twist.

Omafiets fixed the eZee Sprint and rebuilt the back wheel by replacing the hub and rear mudguard.

When I picked it up, I was so pleased to see it again but a little sad to relinquish the Gazelle. It’s taken me a few weeks to re-acclimate to the Sprint but I’m happy to have it back especially during this very wet period in Sydney.

However, after nearly seven years together, I am considering selling it and upgrading. Yes, I know. Love is fickle. 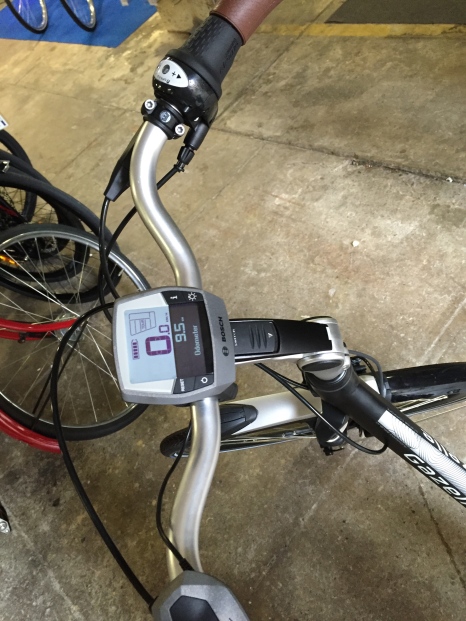 Bosch LED display tells you everything you need to know. It even has a USB for re-charging your electronics. 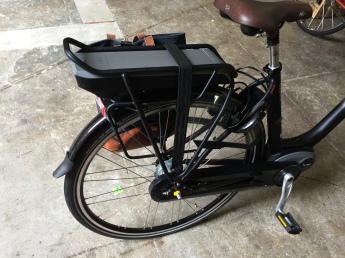 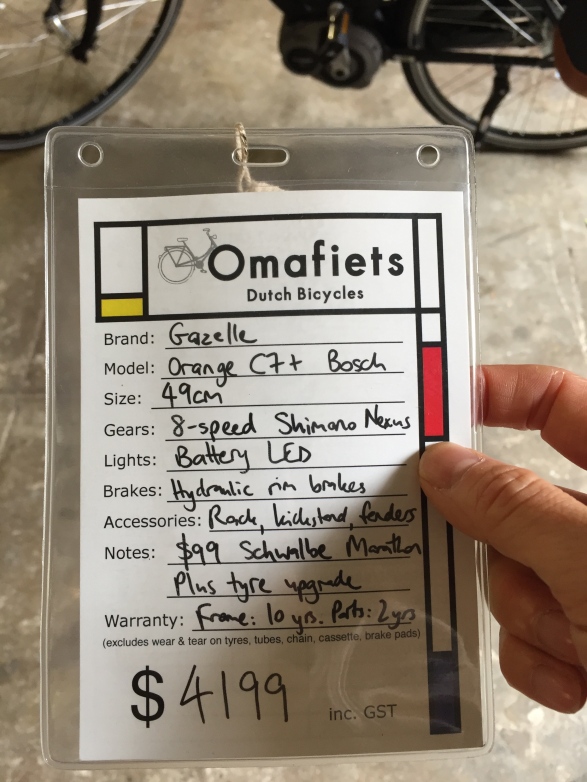 A little more expensive but the difference in quality is noticeable.