Several months ago, I took the ferry to Manly. I had an appointment with Chef Jason Roberts of Manly Pavilion and took my e-bike along for the morning. I didn’t know how far I would need to travel to meet him at the restaurant. I locked it up in the bike rack provided near the doors of the ferry and sat outside to enjoy the journey.

On each of these trips across the harbour, I always meet fellow bicyclists who are intrigued by my e-bike. I catch admirers, and they are always men, staring at the components of my e-bike with a degree of studiousness akin to women who look at diamonds. We usually have a brief conversation about how far the battery takes me and how fast I can go.

On this occasion, I was returning to the city and another e-bike admirer struck up a conversation with me.  He asked me about the power of the battery. My answer: Not sure. But then he went off on an alarming tangent. He stated that e-bikes were the future but then focussed on their speed. I reminded him that the engine cuts out at 25km/hr. He stated that he thought the faster e-bikes could go, the better. He likened them to motorcycles.  I reminded him that e-bikes in their current form don’t require a license because it’s necessary to pedal. Also, that riding a motorcycle requires specific training and wearing protective gear in case of falling at high speed. I know this firsthand because I used to ride pillion with my husband on his Kawasaki 950 GPZ. I have motorcycle jacket and pants buried somewhere in our house.  I could see there was no sense continuing the conversation. He carried on talking at me until I could “cut and run.”

It’s a bad habit that bicyclists get caught up in frequently. “How fast can you go?” is a question that I am often asked (especially by men). But even I have become ensnared in this mentality mostly when running late for an appointment. If late, I will resort to the e-bike despite the original plan to take my urban bicycle. Does it really save me that much more time? Not really.

I test rode a Brompton in Newcastle recently and it reminded me of the pleasure of bicycling in an unfamiliar city. While Newcastle’s terrain is flatter than Sydney’s I have seen many people climbing hills with the Brompton. That will be my next challenge in Sydney. I was in town for the Bicycle NSW conference and had organised a few meetings. One of the first was to meet Nick from Brompton Australia to borrow a Brompton for the weekend.

I walked 3km, from my Airbnb to the pub in Merewether. The walk seemed to take forever in the darkness of suburban Newcastle where the car was clearly still king. Between learning how to fold versus riding it for the first time, I would say that it was much more difficult to learn how to fold the Brompton. My first impression of the ride was its “twitchiness.”

The handlebars were very sensitive and the ride a little bumpier.  Nick suggested adding some weight to the carrier bag which attaches to the front to give it some more stability. Also, working out the seat height was a little tricky. I had the seat very low until I grew accustomed to the weight and balance of the bike. Eventually, I adjusted and was able to perform the “jump stop” that I use on my urban and road bikes by setting the seat high enough to use the length of my entire leg when pedaling.  I worked out how to “park” the bike but the entire fold would elude me for the rest of the weekend until I was forced to ask for help. But I was amazed at how quickly I could travel despite the frame and the smaller wheels. Gear ratio makes all the difference.

I met Dr. Steven Fleming for the first time on this trip. We went grocery shopping together and he helped me refold the Brompton to place it in a shopping trolley.

I had asked Nick for a lock which went unused for most of the weekend which was again another paradigm shift for me. Instead of locking up outside and leaving bicycle to the elements, bring it along with you while you shop and eat.

I placed it in the “park position” at Steven’s house while we had lunch and then went for a ride together to the beach. I was getting better at flipping the wheel out in a smooth motion. That evening, I attended the dinner prior to the start of the Bicycle NSW conference. Again, the Brompton was safely parked while I ate dinner and had a glass of wine. Maybe it was the glass of wine but I was emboldened to try folding it down and tucking it away in a corner of the house. I couldn’t manage to hook the wheel to catch on the frame which was frustrating and then I had a flash of insight.  If I folded it away, I might not be able to assemble quickly to make the start of the conference. But I was tired and couldn’t quite manage to reposition it to the “park” position.

As I predicted, I had trouble reassembling the partially folded Brompton in the morning. I even watched a few Youtube videos. I was late for the start and ended up sitting at the conference table with the NSW Police. The conference organisers had kindly set aside a parking room for the bicycles and again I left it in its parked state. Several others in attendance had brought their Bromptons and I learned that the designation of several Bromptons together are a “fold.” Sigh.

Unfortunately, the seat was starting to hurt whenever I rode for longer than 15 minutes. I wasn’t surprised as I once tried eight seats for my mountain bike and was miserable because none of them suited.

Funnily enough, I encountered bicycle discrimination the afternoon of the conference. A “fast ride” and a “slow ride” were scheduled after all the presentations were finished for the day.  I inquired about the pace of the fast ride. I wanted to stretch my legs after a full day of sitting. But also because I wanted to make the point that it’s not necessary to change into lycra to bicycle anywhere, even to go fast. I was told that it would be unlikely that I would be able to keep up and would likely be “dropped from the ride.” So much for inclusion but never mind, I thought, because of the painful seat.

Fast enough at the Newcastle Velodrome.

I finally worked out how to fold the Brompton because I was forced to do so. My husband and children rode to the penultimate cyclocross race of the season held at Newcastle Velodrome. I had the job of packing up our bags, tidying the house and folding the Brompton to carry it in our GoGet car to the Velodrome. We would leave for Sydney after the race and I would drop the bike at Nick’s.

I missed my daughter’s race, my husband’s race, my son’s balance bike race because of my inability to fold the Brompton properly. In the end, I phoned Steven Fleming because innumerable Youtube videos were making me cross and sweaty. The problem was that I had put the seat down too quickly which changes the geometry. It is impossible to fold properly with the seat down too soon.

Having mastered the precise order of folding, I used it to try riding some of the cyclocross track after the elite race was finished.

In comparison to how fast it can be…

Garry Millburn and Chris Aitken showing how it’s done. Both were interested in doing the same with the Brompton.

Am I a convert? Yes, absolutely! Hooray for the pleasures of bicycling at a reasonable pace.

The key for me was leaving the seat until last!

How to fold a Brompton: 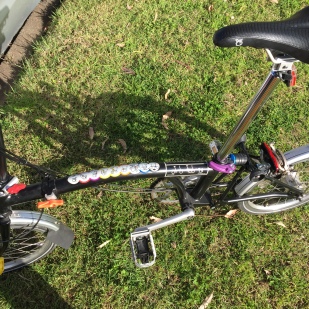 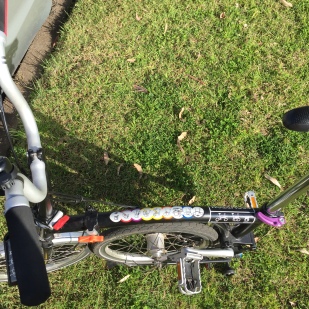 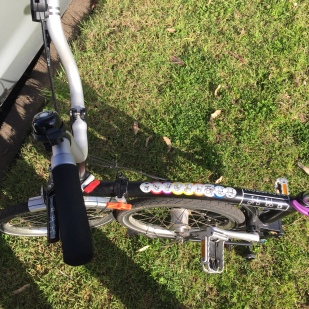 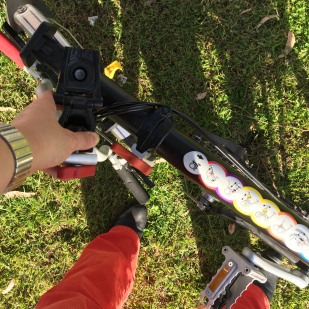 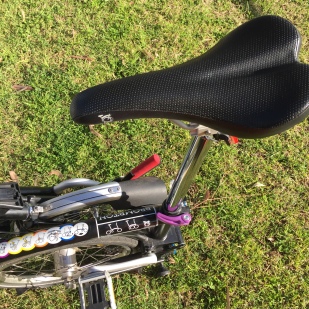 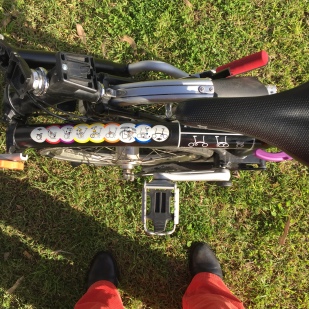